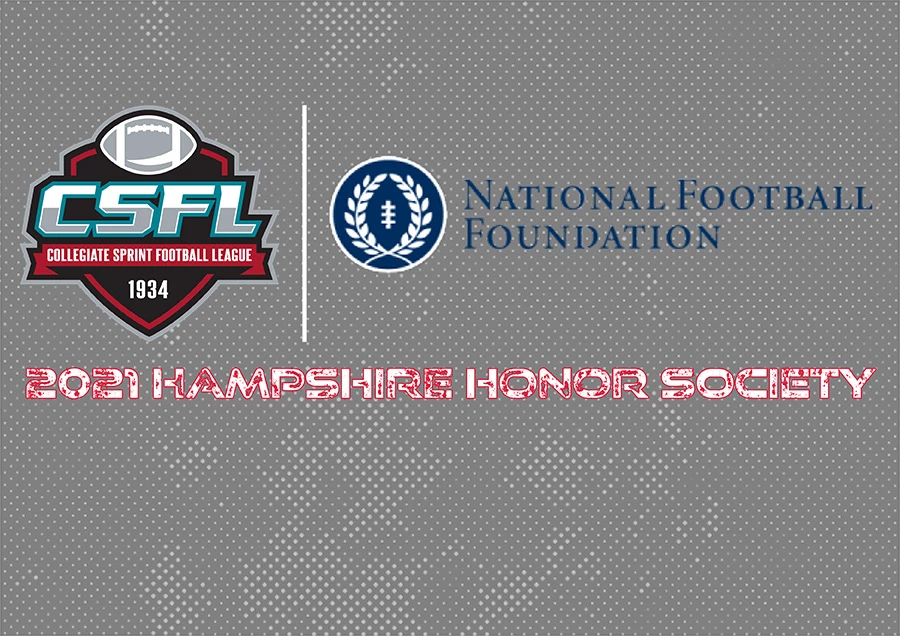 NEW HAVEN, Conn. -- The Collegiate Sprint Football League (CSFL) made history on Wednesday, as 24 of its student-athletes were recognized as inductees in the prestigious National Football Foundation's (NFF) Hampshire Honor Society (Class of '21). It marks the first time in the conference's history that its student-athletes have been honored on a national level by the NFF.

The NFF's Hampshire Honor Society inducts student-athletes from across all levels of college football that meet certain academic standards while balancing the rigors of playing football. An elite group of 910 players from 255 schools qualified for membership in 2021 -- the Society's 15th year. The initiative has now honored 13,077 student-athletes since its inception.

Nominated by their respective schools, newly-inducted members of the NFF Hampshire Honor Society must have:

**Completed their final year of playing eligibility in Fall 2020 or Spring 2021;

**Graduated players, who have remaining eligibility but will not return to collegiate play (e.g. declared for NFL Draft or retired from football), may also be nominated.

**Met all NCAA/NAIA-mandated progress towards degree requirements; and

**Been starters or significant contributors throughout the 2020-21 season.

"We are pleased to honor another impressive group of athletes as part of this year's Hampshire Honor Society," said NFF President & CEO Steve Hatchell. "For more than a decade, the Hampshire Honor Society has served as a powerful vehicle for schools to recognize their college football players who have distinguished themselves both academically and athletically, and we congratulate the schools and each of these young men for their commitment to excellence in all aspects of their lives."

The 24 CSFL student-athletes who were inducted into the Hampshire Honor Society included:

Jon F. Hanson, the chairman and founder of The Hampshire Companies, provided the funds to launch the NFF Hampshire Honor Society in 2007. He made the contribution as part of his legacy to the organization after serving as NFF Chairman from 1994-2006. He currently serves the organization as chairman emeritus. Each player awarded with membership in this year's Honor Society will receive a certificate commemorating his or her achievement.

"It was my great privilege to endow the NFF Hampshire Honor Society, which has greatly increased the number of college student-athletes the NFF has been able to recognize during the past 15 years," said Hanson. "Nationwide there are thousands of football players excelling in the classroom, and they are going on to become great leaders."

"We have honored more than 13,000 student-athletes in the last 15 years thanks to Jon Hanson's generosity," said NFF Chairman Archie Manning. "We are grateful for his passionate belief in the scholar-athlete ideal, and the Hampshire Honor Society allows us to showcase the names of tomorrow's leaders while inspiring future generations to follow in their footsteps."

Sprint Football is a full-contact, intercollegiate, varsity sport that features the same rules as NCAA football, except that all players must weigh 178.0 pounds or less. The league has been in existence since prior to World War II.The Collegiate Sprint Football League is comprised of 10 member institutions including Alderson Broaddus University, Army West Point, Caldwell University, Chestnut Hill College, Cornell University, Mansfield University, the U.S. Naval Academy, Post University, the University of Pennsylvania and St. Thomas Aquinas College.